Personal story was as prevalent at the National Storytelling Festival as cowboy boots on young Tennessee women at the Johnson City Red Lobster the night I ate there. If your looking for a ratio, I estimate, and roughly, it was two out of three. 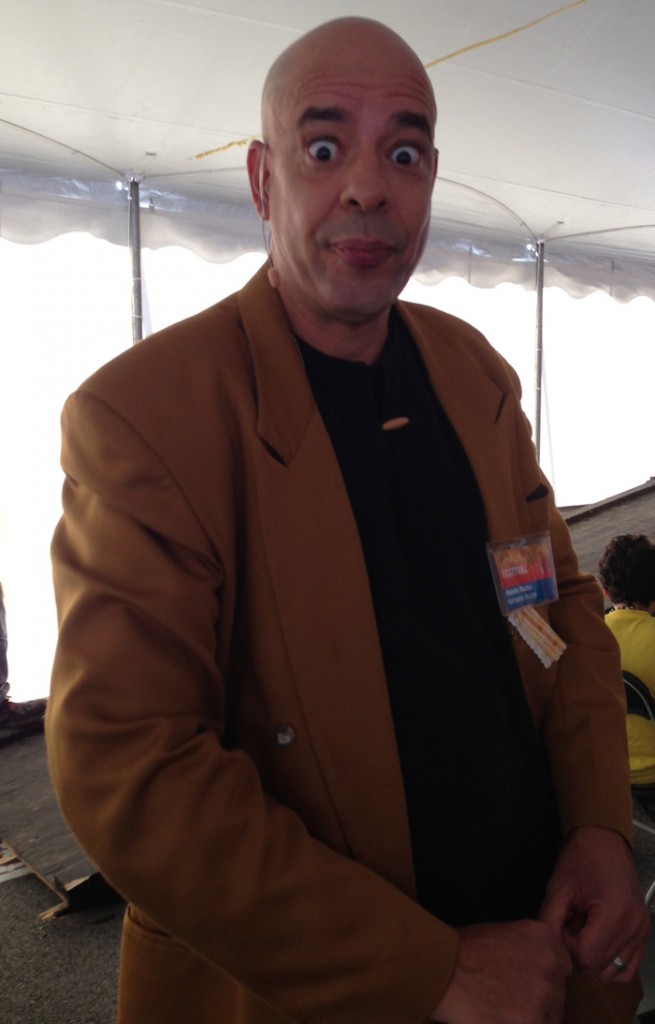 What a great sport to pause during his pre-story warm-up for a photo. Rocha rocks!

Since Jonesborough is in the South, it was no big surprise that many of these true tales involved faith. That’s no problem, no problem at all, for me, a genuine born-again, Southern evangelical Christian.

There were Jewish tales from Syd Lieberman and Shonaleigh. There were Christian tales by Donald Davis, Geraldine Buckley, Victoria Burnett, Tim Lowry and Elizabeth Ellis who fought David-vs-Goliath against local and national government agencies. There were tales that seemed almost Christian, if taller than true from Bil Lepp, Methodist minister turned comedic storyteller and five-time winner of the West Virginia State Liars’ contest. Lepp was the first teller I heard and I must admit I had to resist shouting “Amen, brother. Preach on!” when his story involved fondue recalling how I almost set my hair on fire coming a tad too close to Sterno hosting the ladies of my small church group.

But perhaps the most inspiring picture of faith didn’t mention faith much if at all. It must have taken great faith for Brazilian born, Portuguese speaking Antonio Rocha to leave his native country and set up camp in the U.S. with grant funding to perfect English, perform and study mime. His inner battle when he traveled farther north to Maine with early winter sunsets and sub zero cold to live with a family he didn’t know and obtain a BA in theatre is “fish-out-of-water” universal and raises empathy.

Rocha won that battle and was still in the U.S. when he turned forty. Because “life begins at 40,” to commemorate this milestone Rocha and a son of his Maine host family traveled to Africa. Rocha, a student of Marcel Marceau, uses mime movements to artistically illustrate his last steps to the summit of Mt. Kilimanjaro.  Was his elephant experience during safari true or tall? You’ll have to find out for yourself!

Rocha has told around the globe. Taste for yourself.

Gratitude: Affirming one another through stories by Len Froyen (Parkhurst Brothers Publishers, 2013)

When I joined the National Storytelling Network at the National Storytelling Festival in Jonesborough, Tennessee, I was given Froyen’s soon to be released book as free bonus. I admin I haven’t read Gratitude yet. I’m recommending it to you and to myself, I guess, based on Rick Warren’s sermon last Sunday. When I heard Warren’s happy heart workout included gratitude, I thought, “I have a book on gratitude!”

This is a big step. I haven’t recommended a book I haven’t read since the mid-1980s. I gave a best seller to a librarian friend for her birthday. About a week later she came up to me. “You didn’t read the book you gave me, did you?” she asked. “No,” I answered. “I didn’t think so,” she replied and walked away.

I went out and bought the book for myself. I think it curled my very straight hair!

Age and age related illness, as storyteller Victoria Burnett shared in her personal story at the National Storytelling Festival about visiting an older cousin, has its benefits. While her cousin’s wheelchair got them upgraded seats and a face-to-face meet with a major rock star, my mom’s 90 years got us some perks at the festival. With her handicapped permit, we could park in handicapped parking and would have except the festival was overrun by folks with handicapped permits who got there earlier than we did. With her gray hair and walking cane, we rode the golf carts without any qualms. But best of all, with her hearing aids we could sit in the hot pink front seats reserved for the hearing impaired. 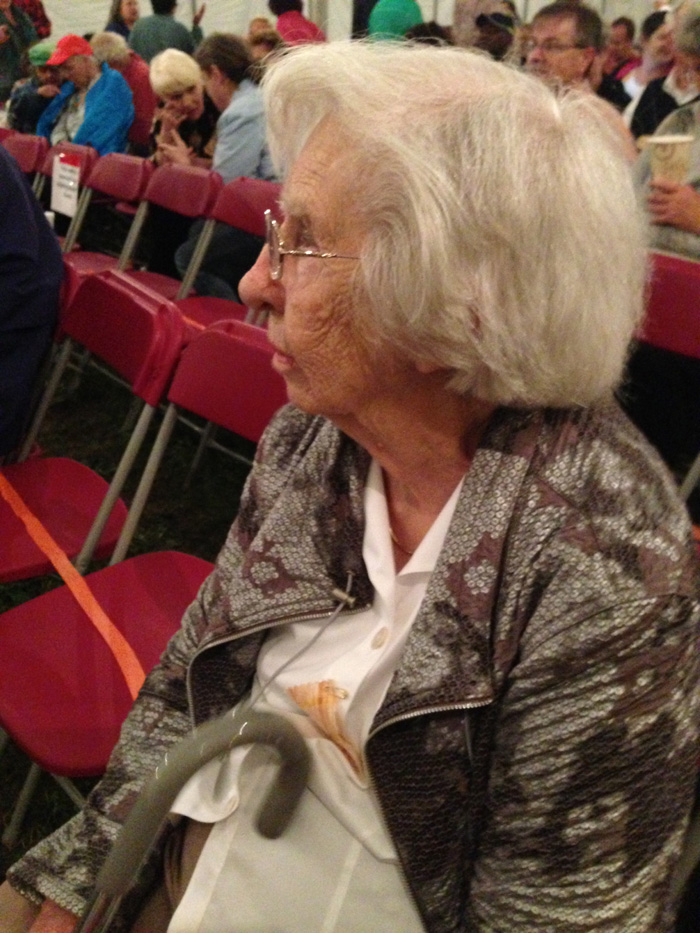 Mom sitting in hearing impaired seats at the NSF. 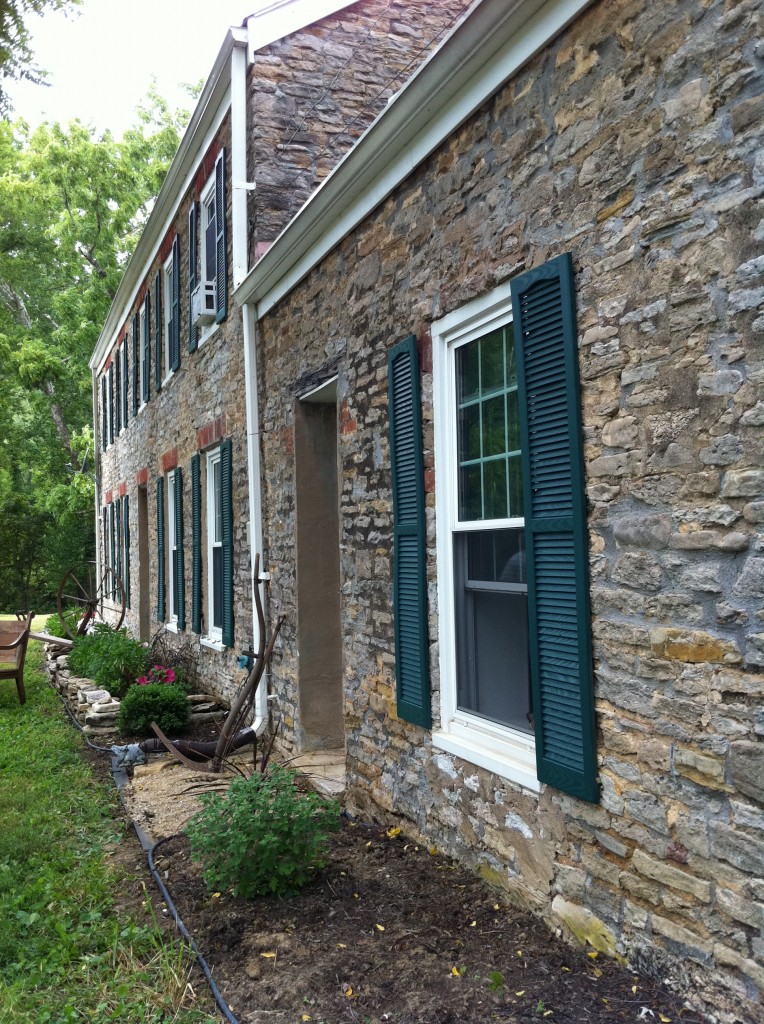