It doesn’t matter how many times you fail-you only have to be right one time.

We bloggers, writers and storytellers, already know the cold, hard fact. If we are to gain the much-desired audience for our work, we have to market our work ourselves. The steps I’d taken so far to announce StoryDame.com – a soft launch to family, friends and acquaintances, the creation of a Facebook fan page and Tweets, and cozying up to other writers, storytellers and bloggers – were more to ensure nothing was hugely off in some major way. Response had been better than anticipated; it was time to attempt to determine and reach my target audience. Though I have an MA in media psychology and social change, marketing seemed as foreign as a trek into Middle earth. When Mom asking if I would be interested in a marketing book she had spotted in an email from Amazon on Saturday, I said, “Yes.”

I’d like to think Mom’s call sprang from high interest in supporting my new StoryDame. But knowing her, it could have been that it was already January and the extravagant Barnes & Noble gift card she gave me for Christmas was already burning a hole in her pocket.

Now, I have absolutely no problem picking out books for myself. If I had that problem I wouldn’t currently be sorting through thirty boxes of books in storage to determine what can be passed on to others. And I had already used the $10.00 card that B&N threw in as a bonus when she bought my gift cards on How to Blog a Book. But the main gift card was so extravagant that I was saving it for something uniquely special and valuable to me on my StoryDame path. Maybe that something special had just presented itself. This book deserved a close look.

Snow was in the forecast for Sunday. Having been iced in before Christmas, the potential of inclement weather called for a special treat. I was going out anyway to get provisions in case the snow predicted actually fell. (It didn’t; cold weather descended instead). Why not make a stop at the bookstore.

A staff member located the fourth edition. The attractive cover revealed it’s an international bookseller with more than 3000,000 copies in print. On the back, the four recommendations, including the one by the CEO of HubSpot, were brief and impressive. But it was the seven pages of detailed Table of Contents that sold the book to me. My local library had a copy, but this looked like a book I wanted to mark up. So, I waited in line for a turn at the register where the saleslady said, “Wow!” when she swiped my gift card.

I’m only on page 34, but already realize it’s worth the price. How did author David Meerman Scott’s book reach astronomical success? “I offered advance copies of the first addition to approximately 130 important bloggers. I sent out nearly twenty news releases…, and my publisher alerted contacts in the media.” Already a plan is emerging…

Aging for actresses in Hollywood means you go from portraying babes to moms to wise old lawyers. Hollywood, according to Paige Morrow Kimball in Aging Out: Hollywood’s Problem With Women Over 40, doesn’t see women as being “attractive and appealing, vital and powerful in the 40s and 50s and beyond.” 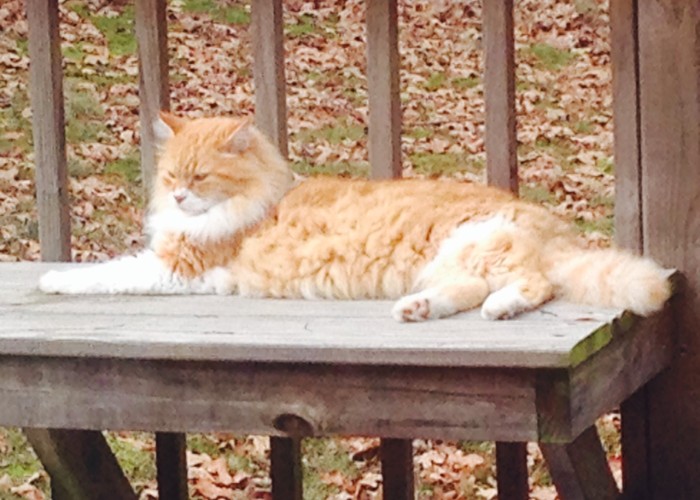 If that isn’t bad enough, aging brings a whole new set of stereotypes to combat. One of the worst, and one I want to avoid like the plague, is the “cat lady.” (This isn’t a joke. Even Wikihow has tips on avoiding it!) By cat lady I don’t mean the “smexy” (smart and sexy) Catwoman as portrayed by the likes of Halle Berry or Michelle Pfeifer. I’m referring to aging, chubby spinsters who collect cats.

If someone were to call me a “cat lady,” I’d laugh (once I got over the shock). I visualize myself laughing longer and louder than I should. I stop laughing only long enough to protest saying I don’t own even one cat! Furthermore, I’d point out, I don’t dress cats in cute clothes or wear sweaters emblazoned with felines. If I am obsessive compulsive about anything, it’s books and the last time I looked they carry little stigma and no litter box stench.

Later, probably much later, I would laugh because I’m eagerly seeking my personal funny. Personal funny pays. I’ve seen The Big Bang Theory! So I would be envisioning myself as an alternative to Brenda Frick who superbly portrays the friendly, homeless lover of pigeons in Home Alone 2. (Well, one can dream!)

Even when I turned 60 and was still single and “looked like a good cook,” I didn’t fear cat lady designation. I owned a dog, just one. Then my dog died. And if grief wasn’t enough, one day I looked out on my deck and what should I see…

That cat is not mine, but I’m going on that diet anyway.

What did you eat on New Year’s Day? Did at least one of your meals include black-eyed peas? If your answer is, “Yes,” it’s likely you’re living in the South, grew up in the South or have been heavily influenced by the region. 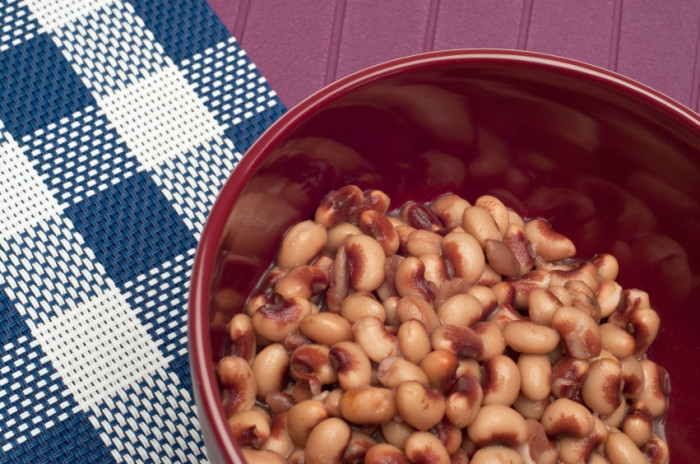 For the Southerner, black-eyed peas are a must-eat on January 1. Eaten on New Year’s Day, black-eyed peas are thought to attract good luck, specifically financial good luck, for the one eating them. Sometimes folks add other fare like ham hocks, greens, cabbage and cornbread.  Don’t be dazzled by the trimmings intended only to round the peas out into an actual meal. The promise is attached to the peas.

Maybe that’s why the Kroger shopper who pointed out the fresh black-eyed peas staring up from the iced bin a couple of days ago seemed shocked as I walked right on past. Was I thumbing my nose at good fortune?

That raises a question. Does eating black-eyed peas really bring good fortune? I don’t know of any actual studies that prove the efficacy of this common legume. But I planned to eat peas yesterday and here’s what I experienced from the black-eyed pea good fortune distributers.

I arrived at Dillard’s at Park Plaza Mall in midtown Little Rock about 10:30 a.m. I was late and I knew what I faced from last year’s experience when I had to park block’s away across from Catholic High School. January 1 is Dillard’s “Take an additional 50%” sale. What this means (for those of you who aren’t bargain shoppers) is that if you see a sale rack with 25-50% off, another 50% will be removed at the register. Last year my efforts netted a coat, a sweater coat, a vest and a gold silk blouse – all Eileen Fisher which means my savings were astronomical!

Wednesday there were no vacancies by Catholic High School, so I circled the Park Plaza lot until a woman pointed to her car, parked “luckily” right beside where I was stopped in stalled parking lot traffic. It was 11:00 as I headed straight to the home department. If you’ve any chance at succeeding at the “Take an additional 50% off” sale, you have to go prepared. Unlike the woman two ahead of me, I didn’t have a husband and kid to park in line while I came and went adding and subtracting from a stack of potential purchases. If you’re single, you have to scout things out for the New Year’s Day sale. For you guys lucky enough to avoid shopping with your wife and children, think of pre-sale scouting as knowing where the deer are likely to be in the woods they call home. Just as a deer might not come into your sights that specific open season hunting day, things you pre-select are likely to be gone as soon as the doors open.

My scouting pays off Wednesday. The Calphalon toaster I had spotted that was originally $39.99 but marked down to $29.99 is still there! But the line to purchase it is so long a salesclerk has to point out the end. Am I willing to stand in a line that feels as long as the Pacific Coast Highway to save $25? You bet! Time passes quickly thanks to a chatty naturalized citizen from Taiwan and the spotting of a Le Creuset 2 cup stainless steel measuring pan down from $30.00 to $10.50! Chaching!

All good stories have a mid-story heartbreak. I enter the lingerie section to purchase an adorable red plaid flannel Ralph Lauren nightshirt just in time to see a woman carrying the last remaining two in the size that’s too big, but will do! Fortunately, Park Plaza isn’t Dillard’s only location in central Arkansas!

After lunch, I head to McCain Mall where cars and the shoppers that drove them here have already thinned. Not only do I find the nightshirt in my actual size, but I also happen on an adorable ¾ length sleeve designer T-shirt and a new skirt for my bed!

Shopping exhaustion is its own kind of tired. Did I let mere fatigue chance good fortune for 2014? No way I would chance losing parking spaces, major bargains and other unforeseen fortunes in 2014. I headed to The Dixie Café. The Dixie Café supplies black-eyes peas for free with every meal purchased that one special day every year.