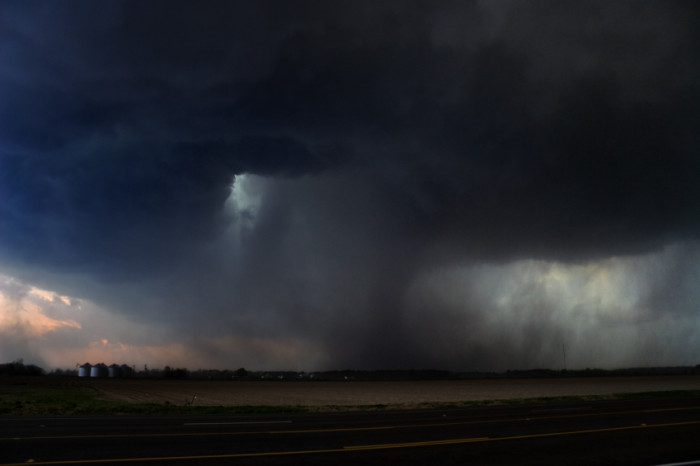 Pictures posted on Facebook included a car in water almost over the top of its hood and a collapsed retaining wall on Kavanaugh, a winding through street. Bad weather struck central Arkansas again Sunday, April 30, 2014, when an EF4 tornado swept across several counties. Homes and businesses were damaged or completely blown away to the foundation. The new $13 million Vilonia Intermediate School was totally destroyed. But the most heart-rending loss was the fifteen lives taken by the tornado.

How does one go on after family members, homes, and businesses are wiped out unexpectedly in a moment? Certainly the disaster workers, friends, and families as well as many other countless hearts that give of their resources to assist are a help. It might also help to tell your storm related story. The Hodgepodge Darling, a blogger named Jessica Sowards who identifies her blog as “one crunchy, Christian girl’s musings on homemade life, motherhood and the daily attempt to walk humbly with her God,” did just that on April 30, 2014. The post goes on to share her friend April’s faith amidst the grief of loss and her own personal physical injuries.

Though the weather predictions were bad, Sowards and her family moved to their new home with its concrete basement in Vilonia the day of the storm. “We’ll be safe, we thought. We were.” Sowards tells of watching the tornado as it moved over the area where her friend April Smith lives. Sowards’ husband went to check on the Smith family, then relayed the horrifying news of the death of the family’s two sons.

As a blogger, you never know when something will ring a bell with the masses and be shared across the blogosphere get picked up or even become viral. The post by The Hodgepodge Darling was published by Faith-it.com, local news stations, and even the Deseret News. As it came to me I was struck by the faith of April Smith, injured in a hospital bed, grieving the loss of her two sons and the family home. I was struck by the love of a friend who was at her side immediately after the tornado hit. I was struck that Soward was so trusted by her friend that Smith told her to publish her hospital bed picture and tell her story letting the whole world glimpse her at her lowest point.

Many of us enjoy folks coming alongside to celebrate our successes, milestones, good times. It takes real transparency to allow others in when we are battered, broken, bruised. The openness to share our deepest depths can be opportunity to show that life isn’t always a walk on the sunny side. Sometimes life’s path is trough dark times we could never imagine or foresee. The courage to tell of those difficult days can encourage others to face their own as well as come alongside. And for those lucky enough to have a friend like Jessica Soward to help you tell your story when you are unable to yourself I say, “Honey, you’ve hit gold.”