The victim was Solomon Northrup, an African American carpenter and violinist from Saratoga Springs, New York, in 1841. A prime example of human trafficking, this free-born, property owning African American, was transported to Louisiana and sold into slavery. Northrup would spend the next 12 years on plantations. 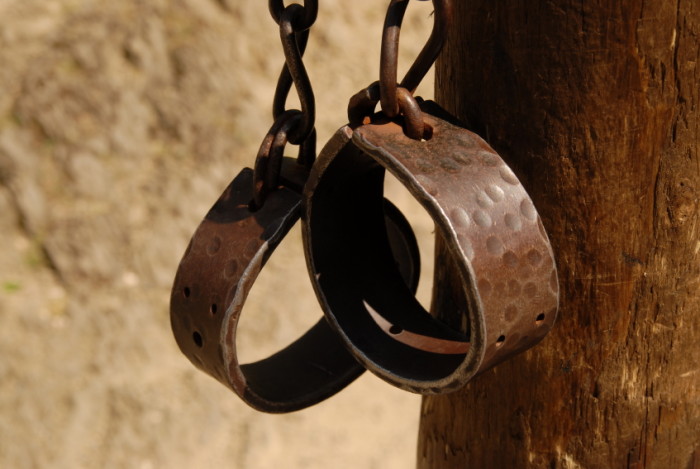 Northrup was eventually freed to return home to his family and tell his story.  In 2014, the film story based on Northrup’s book found box office and critical success winning the Golden Globe for Best drama and  Oscars for its producers (Brad Pitt, Dede Gardner, Jeremy Kleiner, Steve McQueen and Anthony Katagas),  actress Lupita Nyong’o,  and screenwriter John Ridley proving enslavement is a strong story theme.

The blight of human enslavement and trafficking didn’t disappear in the middle 1800s. It still exists globally today in the form of forced and bonded labor, involuntary domestic servitude, child soldiers and sex trafficking.  Slavery might also be an addiction, a marital, work or organizational situation you feel you cannot leave for any reason, or even ideology if it is harmful, dissatisfying, or would be difficult to abandon. To what have you been enslaved?

Northrup accepted a short-term music job only to emerge from being drugged to find himself chained. How and when were you enslaved? Did it start as a simple trying of something that would become addictive? Was it caused by another? Was it hereditary or simply being born into a family that held a certain world view? Has true Biblical Christianity been mixed with “contemporary culture” to approve or justify something that is inhuman, immoral, or just plain wrong?

Northrup recognized excessive mourning for his children, wife, and life is unproductive. He set about to use his talents – carpentry, creativity, and musicality – for his new master’s use. He learned to hold back information that could cause him harm like the fact he can read and write. He learned to spin the truth for self-preservation. What steps did you take to remain safe? Have you held your tongue, cooperated, used your creativity?

Though it could mean his life, Northrup risked telling his story to a white carpenter hired by his master and found a sympathetic ear. The carpenter got word to Northrup’s family who sent help. Northrup was freed in 1853. What risks – physical, emotional, legal, spiritual – did you take to obtain your freedom? What turned the enslavement tables to give you back your freedom?

Back home Northrup told his story. He became active in the abolitionist movement and lectured on his experience and against slavery. As with some true stories, there wasn’t a clear, fairy tale ending. Legal charges against Northrup’s perpetrators went nowhere. By 1857, Northrup had “disappeared” from the face of the earth. The date and manner of his death and place of burial is unknown. But Northrup’s tale stands more than 150 years later as an affront to human trafficking and enslavement. What will you have to risk to tell your story to help others alive today and in future generations?